Mother’s Saree To Heritage Traditions: All The Pictures & Info Of Yami’s Wedding Is Here! 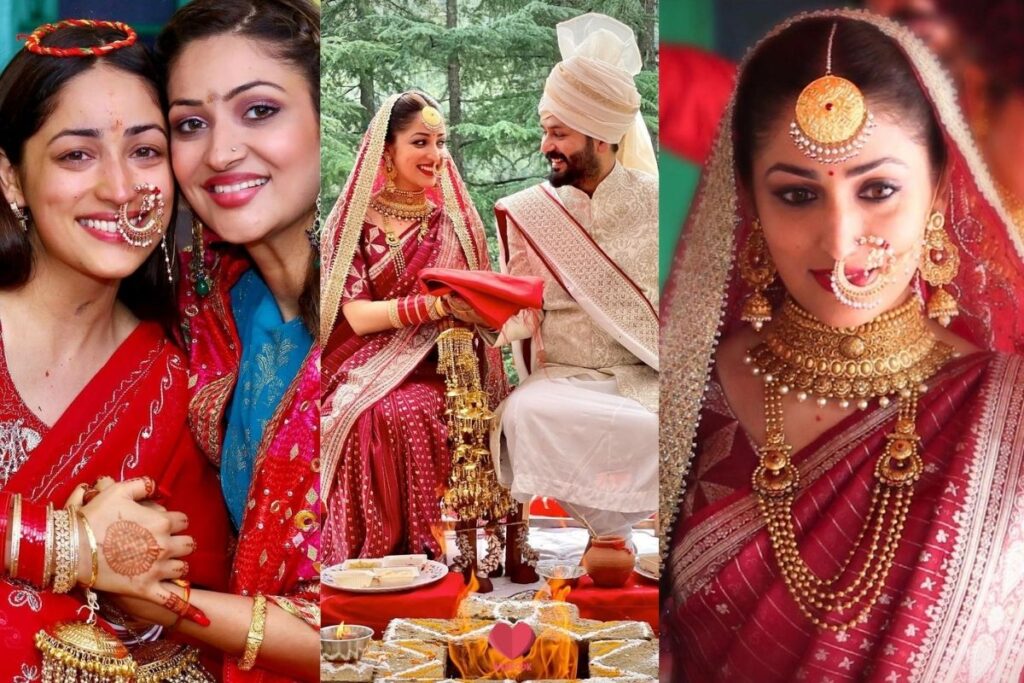 Our beloved movie stars aren’t letting the pandemic come in their way of sealing the deal with their other half. In 2020, Rana Daggubati tied the knot with businesswoman Miheeka Bajaj, followed by Kajal Aggarwal tying the knot with entrepreneur Gautam Kitchlu. Varun Dhawan welcomed 2021 with the bang by marrying his childhood sweetheart Natasha Dalal. And just a month later, Dia Mirza married businessman Vaibhav Rekhi in an intimate, eco-friendly setup.

The latest Bollywood actor to tie the knot in an intimate wedding setup is Yami Gautam. The actress married the URI director Aditya Dhar in a very traditional ceremony earlier this month. Unlike her counterparts though, she kept her bridal ensemble quite simple and her understated elegance has been the talk of the town ever since. 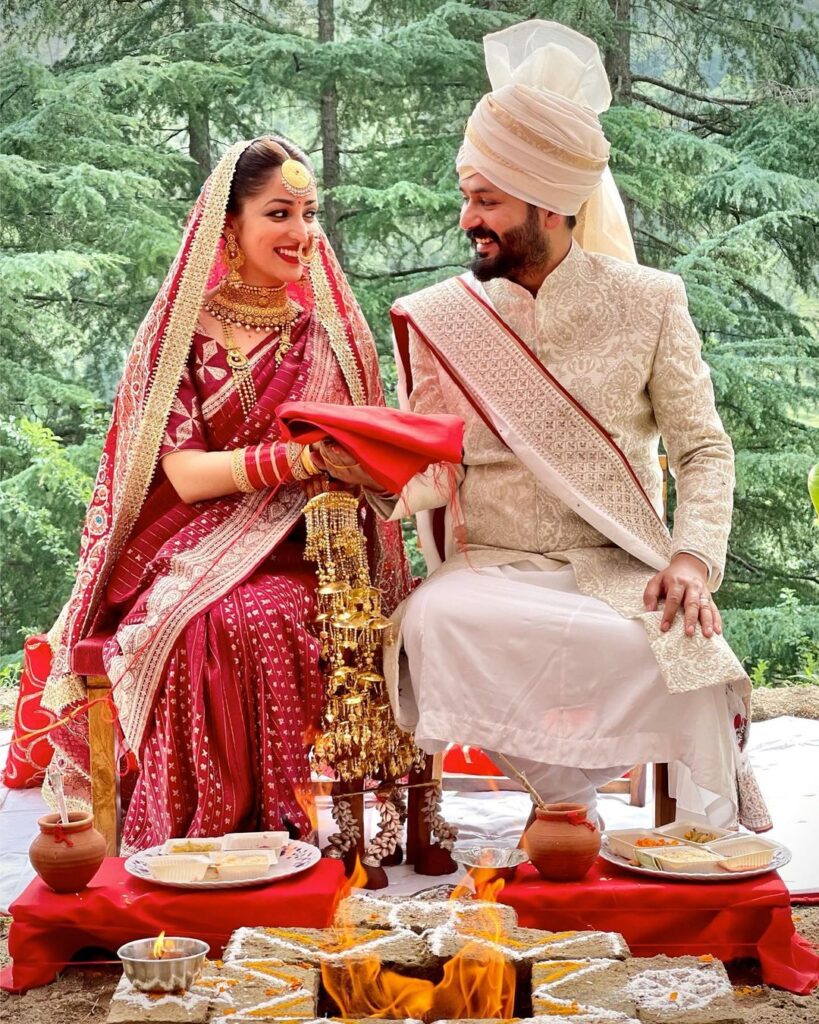 Yami’s bridal look brought together 3 generations of her family

To celebrate her big day, Yami opted for a traditional red saree with gold detailing. She paired her wedding ensemble with ornate gold jewelry. While her outfit defines a simplistic elegance, it had layers of heritage, tradition, and significance steeped into it. The ensemble brings together three generations of her family, her grandmother, mother, sister to Yami herself.

The heirloom red silk saree is 33 years old and belongs to her mother. Doused in a deep-red hue and embellished with timeless craftsmanship, the attire catches the eye and looks magnificent on the wearer. She paired her clothing with a floral motif blouse. The whole outfit was graced with a gorgeous dupatta in the complementary shade of red. The dupatta belongs to Yami’s maternal grandmother. She sent it to the actress as her blessings and love because she couldn’t be a part of the celebrations due to the ongoing pandemic. That wasn’t all from her grandmother’s heirloom though.

A striking part of Yami’s bridal look was the traditional Pahaadi style Nath, which was also sent by her grandmother. Rest all parts of her bridal jewelry were heirloom too. From the immediately appealing maangtikka to gold choker and beautiful earrings. The kalire she paired with her ensemble was decorated with cowries and coconut.

Beauty-wise, the actress did her own makeup. Impressive, right? And also in line with her basic bridal style. Kohl-rimmed eyes, flawless face, subtle blush, and matte red lips created a stunning, fuss-free bridal look. For her hair, she turned to her forever bridesmaid Surilie Gautam who put them all in a neat bun. Her beau, Aditya Dhar, complemented his bride in an ivory sherwani with muted golden work. 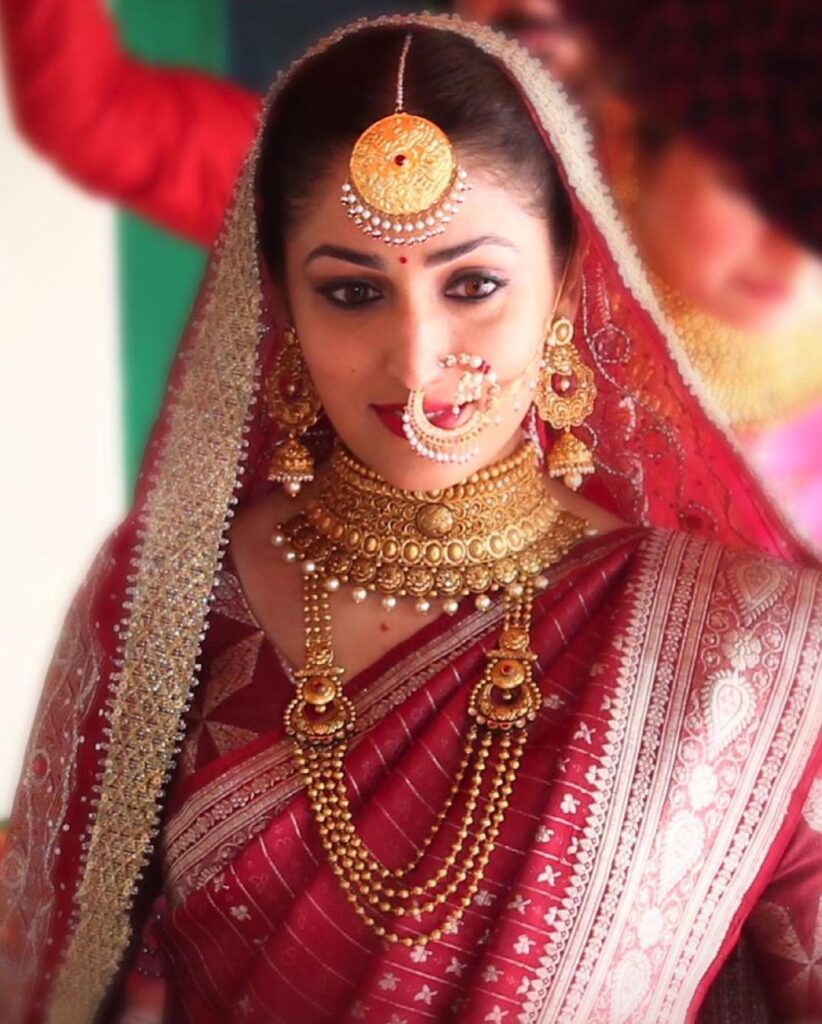 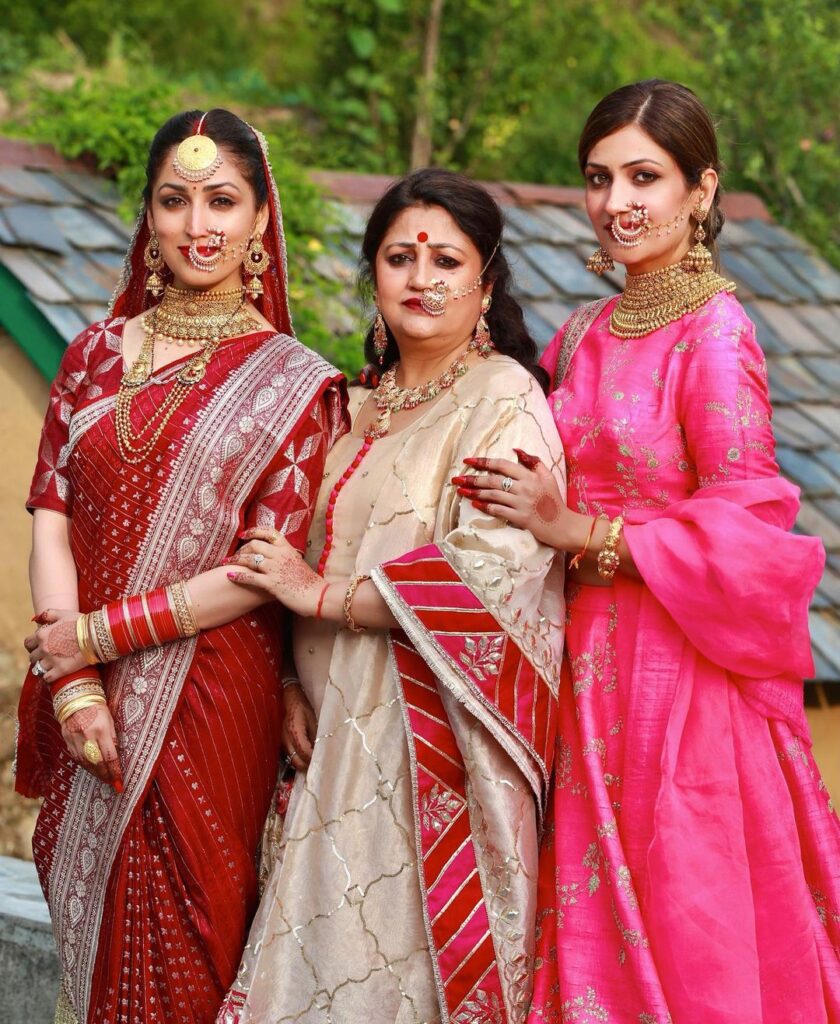 The main ceremony was preceded by traditional pre-wedding revelries

After the actress released her wedding ceremony pictures, she released a slew of pre-wedding pictures of her haldi, mehendi, and kalire ceremony. Keeping in line with the simplistic aura of her bridal avatar, she kept the ensemble and makeup for all her ceremonies effortless yet gorgeous. 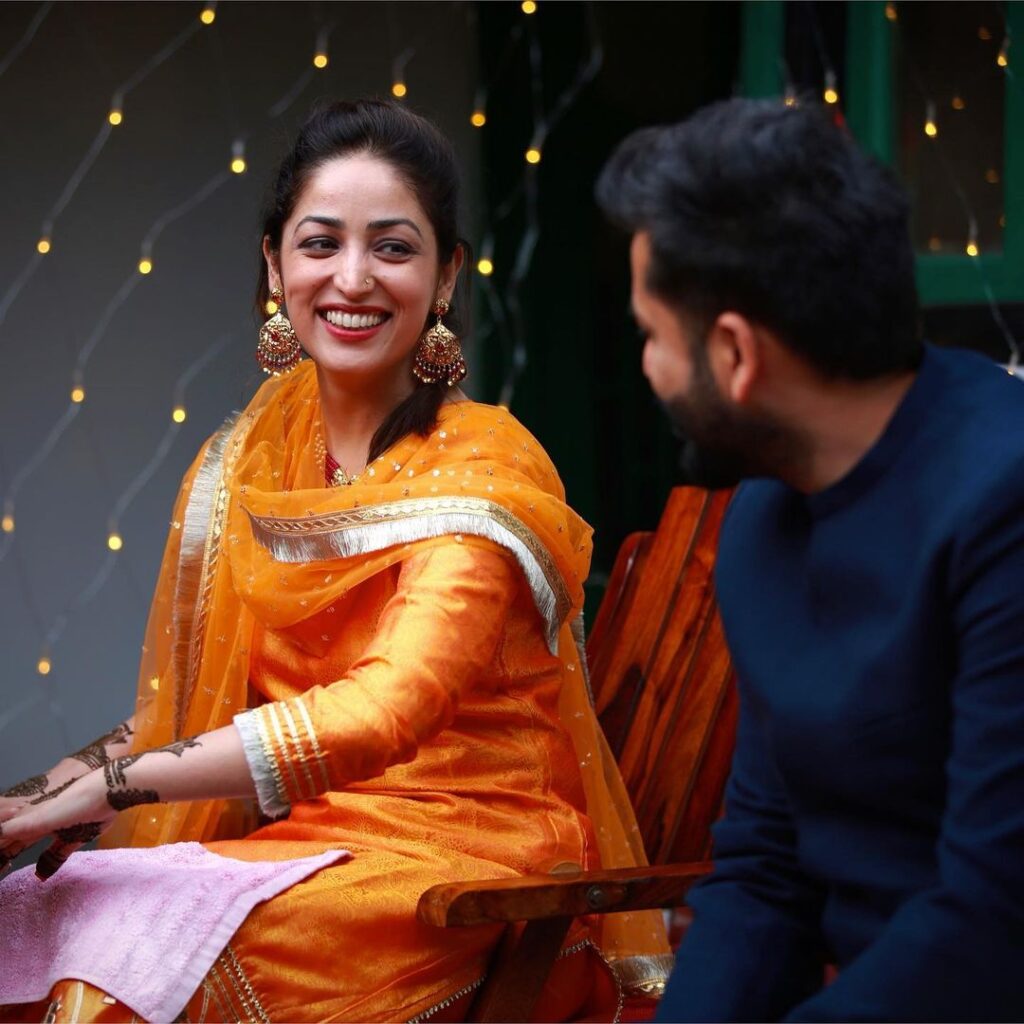 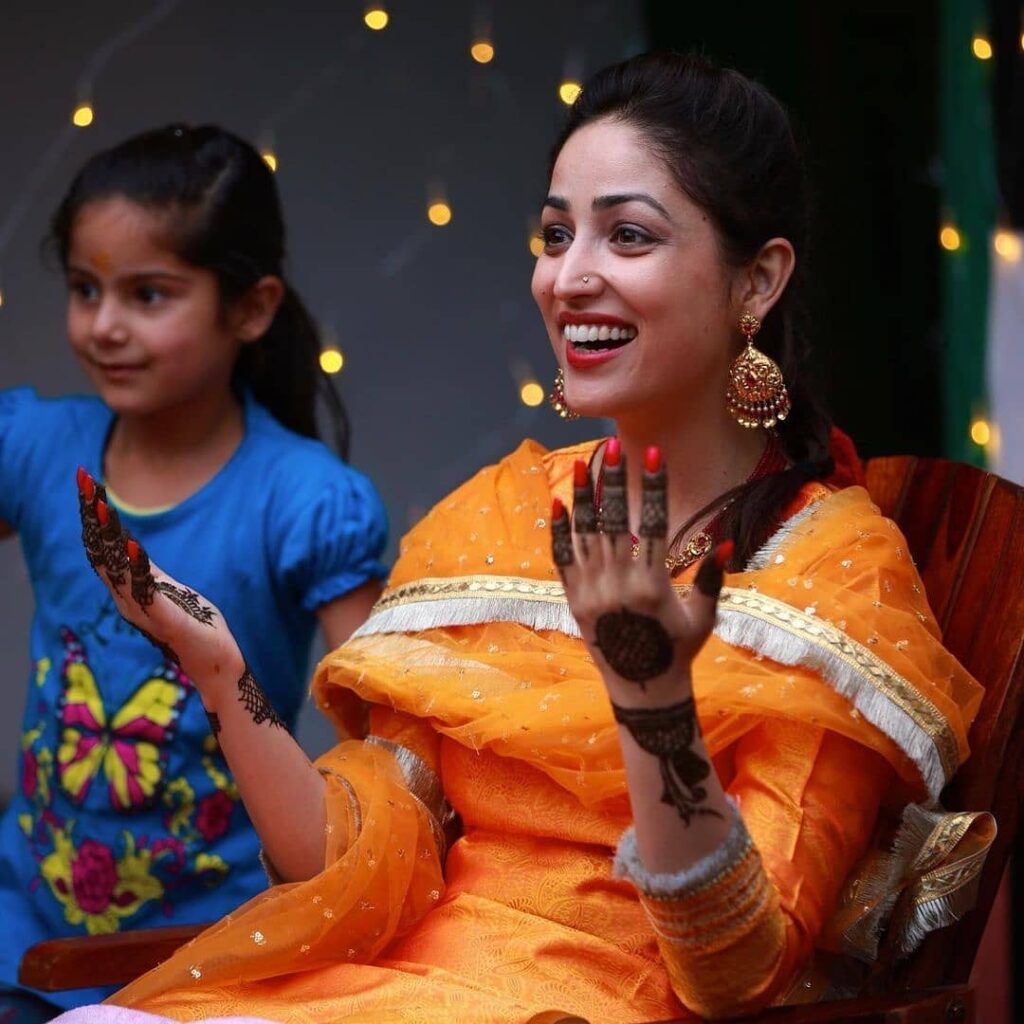 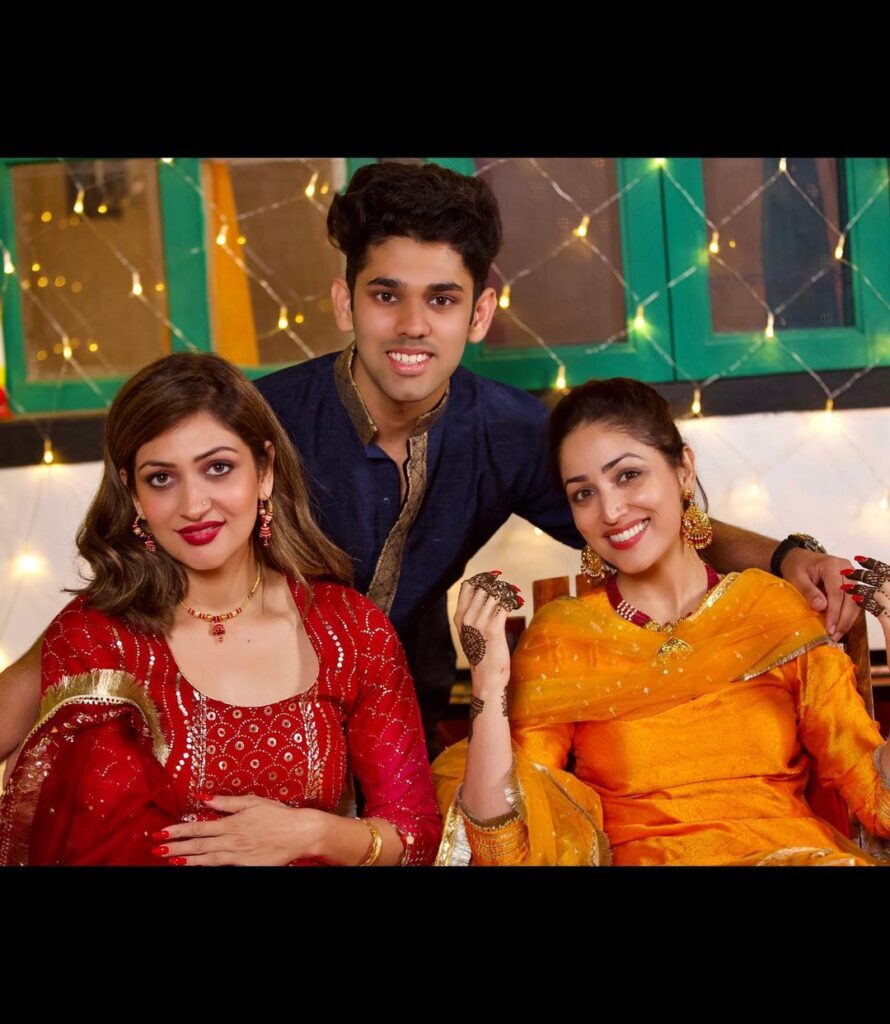 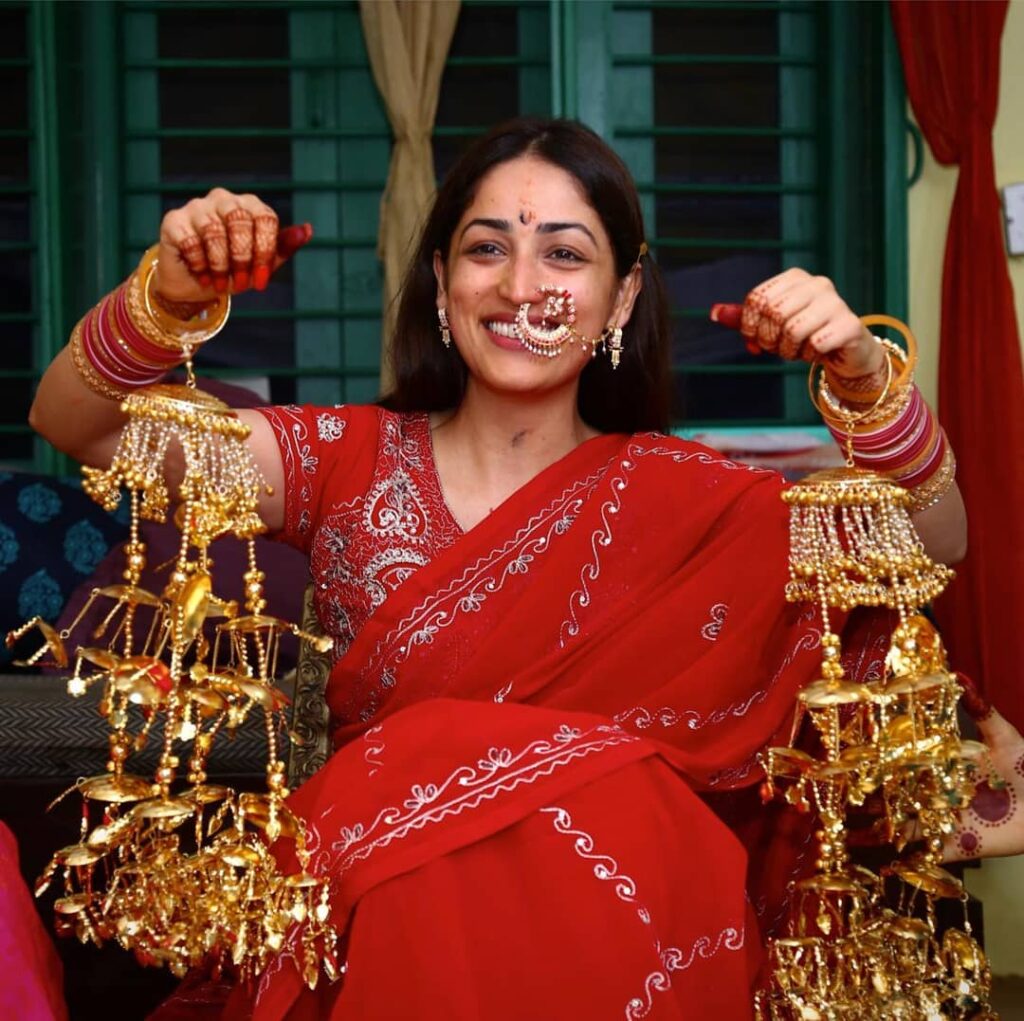 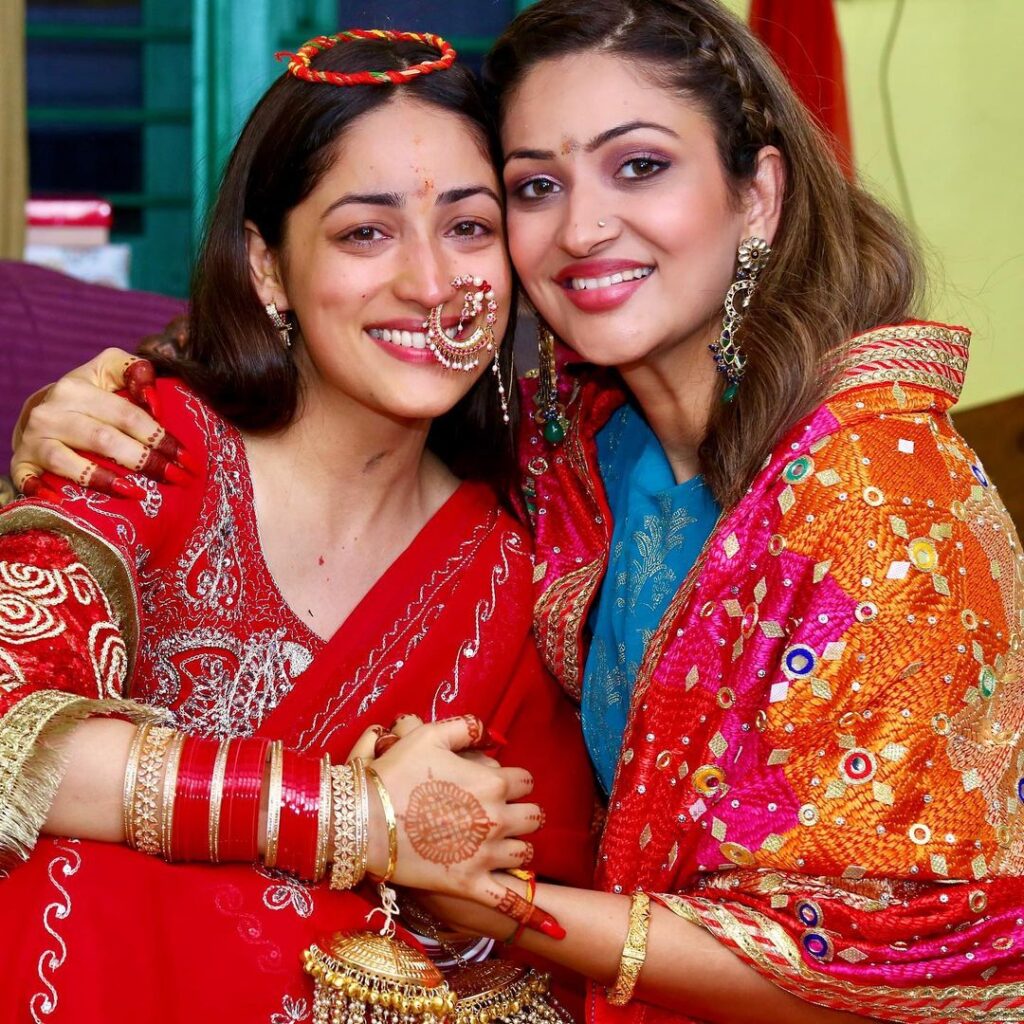 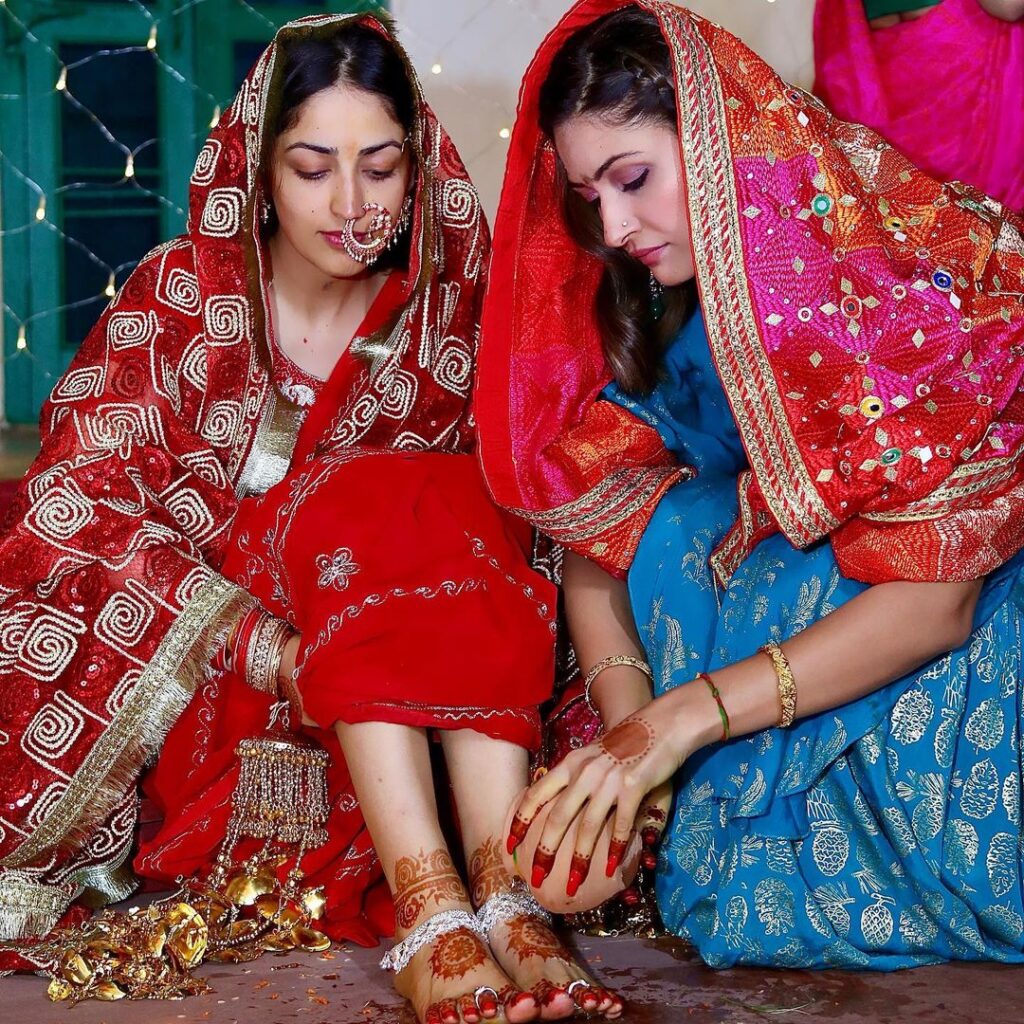 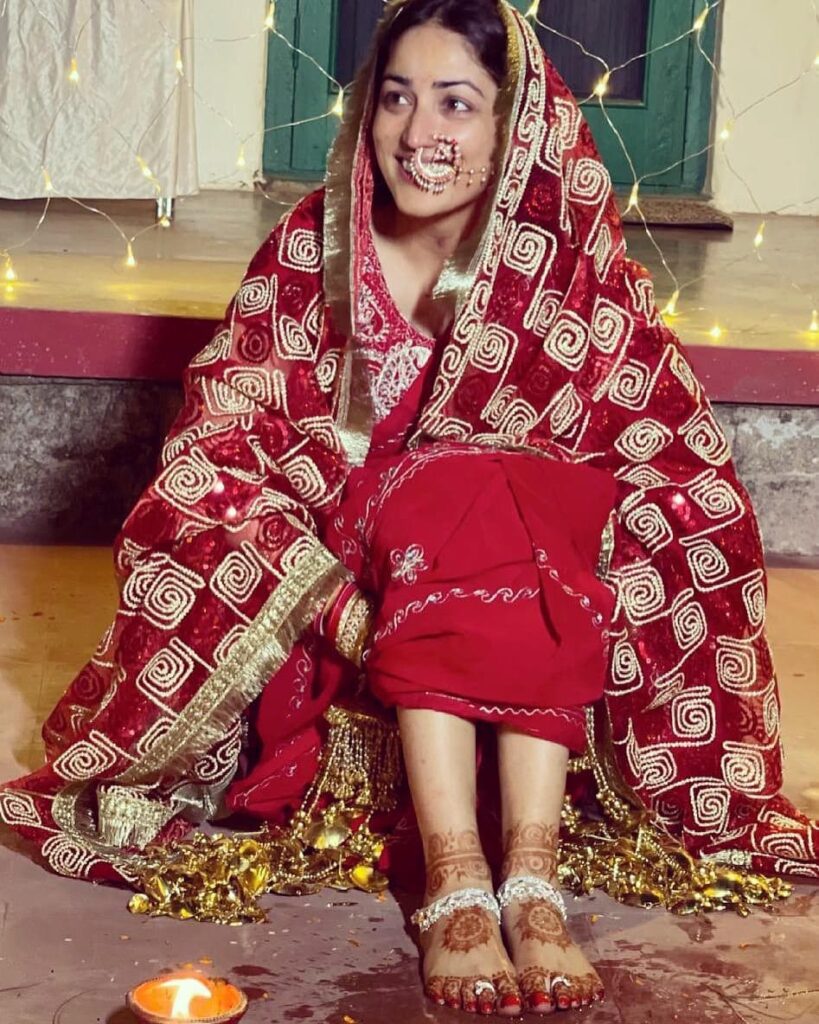 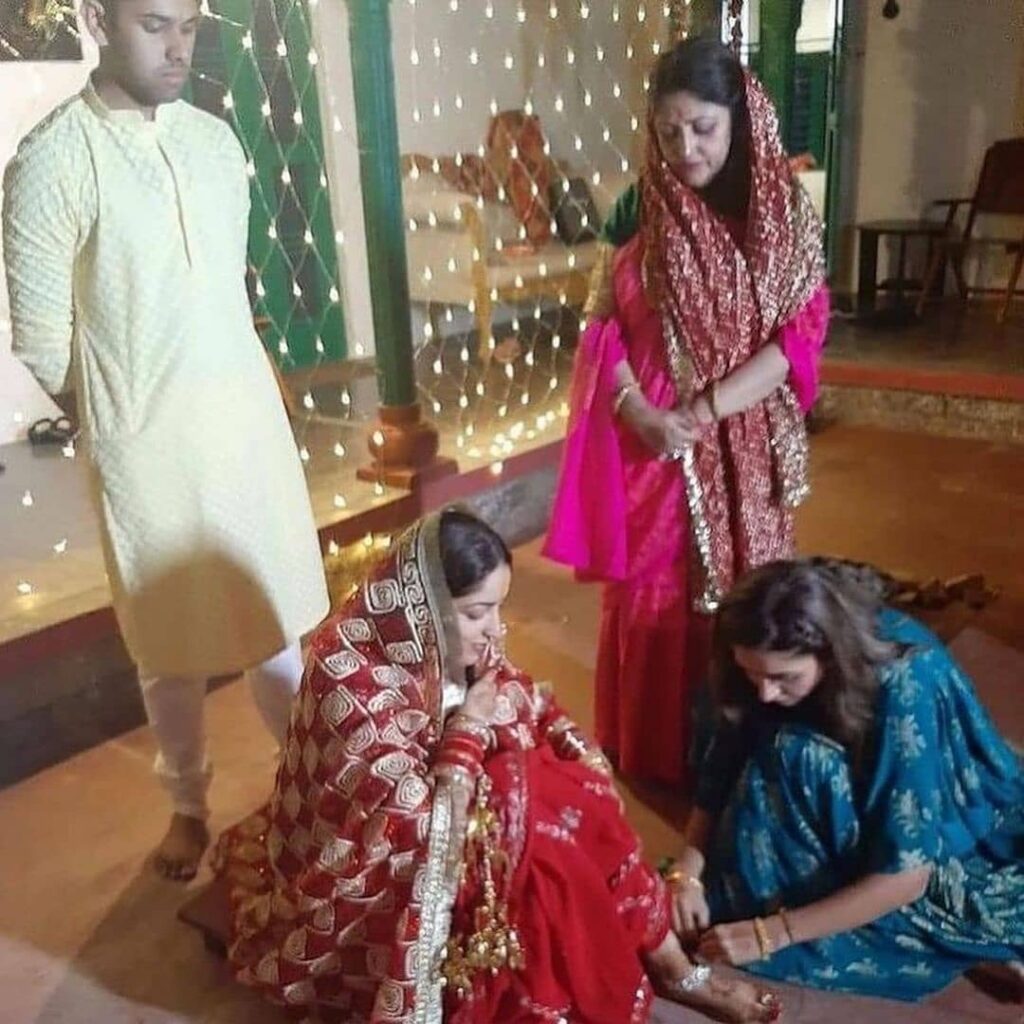 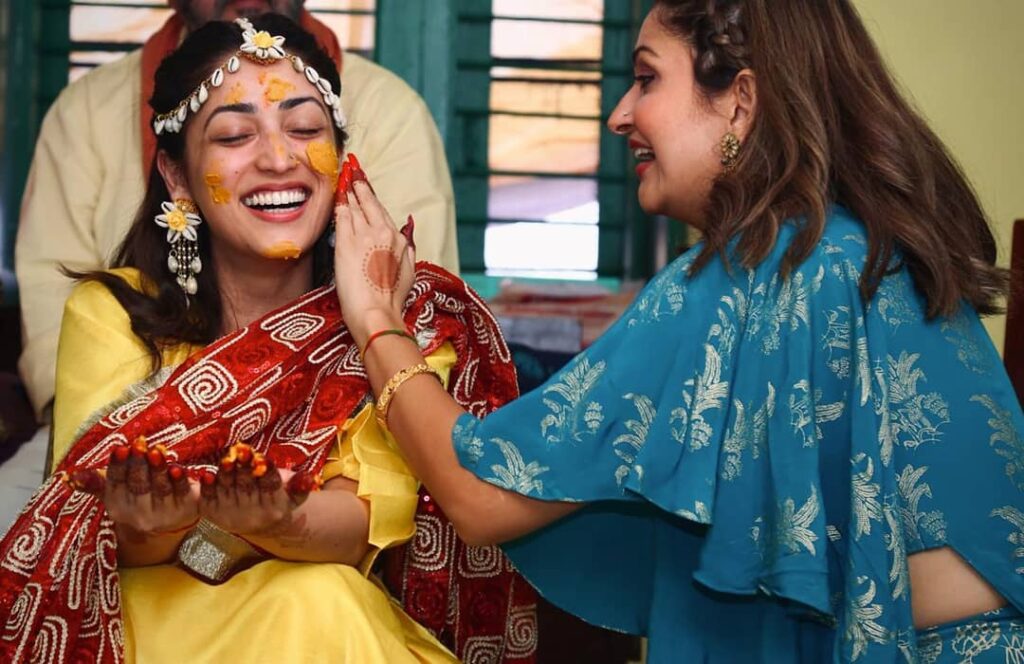 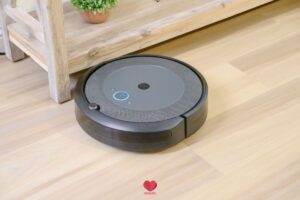 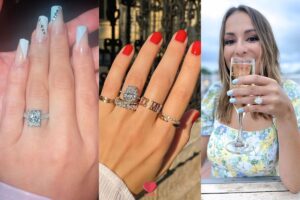