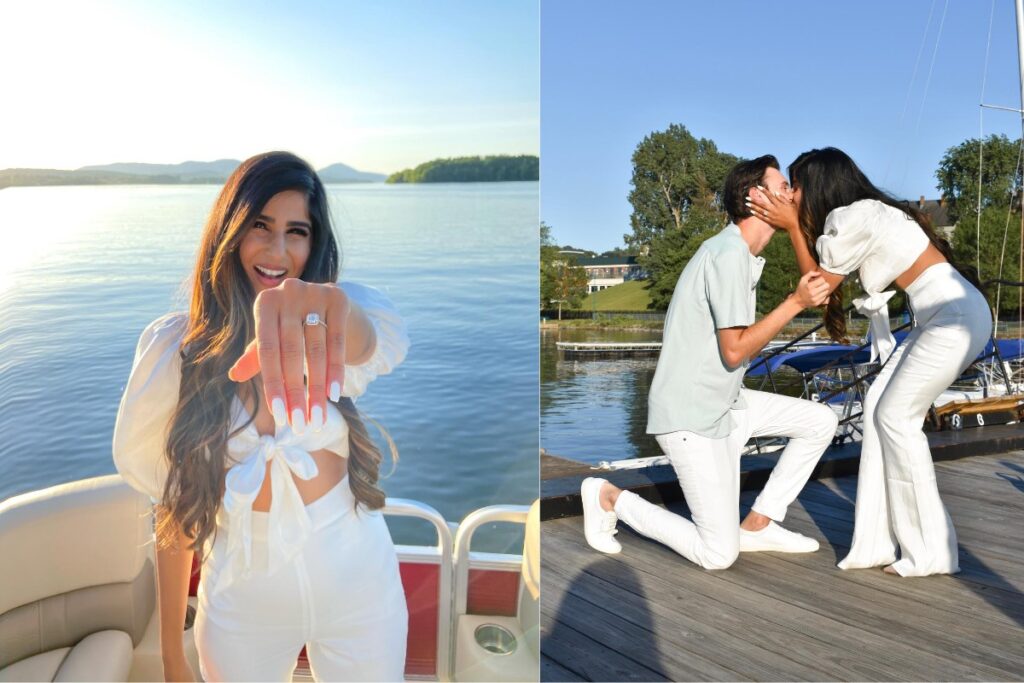 Finding love on a whole other continent, with a man from a different culture sounds crazy at first. But you know what they say, you don’t find love, your love finds you. And when that happens, there’s hardly anything that can keep you apart from each other.

We came across Tamannah’s beautiful Indian-American love story and wanted to know all about it. She sent us the snippets along with a beautiful write-up & our eyes welled up reading it. So we had to share it with you all!

Do you have your tissues ready? Alright, here we go!

We met at a Speakeasy in New York City. Funny story – he asked to buy me a drink and I said yes. 30 mins into *one of the best* conversations I’ve had at a bar, I realized I needed to leave for a friend’s birthday out of the city so when he asked to buy another drink, I said “I’d love to but I need to head out for my friend’s birthday”. On my way over on the Amtrak, I realized how it must’ve come off – the typical “a friend needs me” blow off so I texted him saying I had the best time and would love to see him again (Yes, I sent the first text & Thank God for that cuz he now tells me that night when I abruptly left, he thought he’d never see me again). We went on a second date (on a weeknight) at a rooftop and talked for 8 hours constantly (I remember because I went to work the next day with 2 hours of sleep). I’m a big believer in gut feelings and I think the way we opened up to each other only the second time we met, felt like we had known each other all along. There was a familiarity and a connection that now looking back, either of us didn’t think we’d ever find.

Fast forward 2 months of casually seeing each other, he asks me if I’d like to go to Boston with him for a UMiami/Boston College game (I went to UM & he’s from Boston), and I remember thinking to myself “why not?”. I don’t think he had any plans for me meeting the family (I know, “too soon”) but as fate would have it, we passed by his sister’s house for a few minutes – and those few minutes were a game-changer. Seeing him interact and play with his 4 nieces, something hit me – I realized that my heart was at peace around him and that he embodied every single quality I always imagined (& hoped) for my partner to have. I remember this distinct calming feeling that I had never had in this country so far (I’m from India, came to the U.S for college and stayed for work after) – a feeling that I was home.

2 years of dating, 1 very awkward-at-first incredible vacation to Iceland to meet my Punjabi (Indian) family, 1 cross-country road trip to move from New York to Los Angeles, and a million adventures later, he finally popped the question.

We had definitely talked about a future together, but with COVID-19, all our travel plans for this year had obviously been canceled. However, we kept this one trip to visit his family’s lake house in Newport, Vermont at the border of Montreal, Canada. It was the most grounding, peaceful, away-from-all-the-noise trip that we both needed but I wasn’t expecting him to propose at all – didn’t even think he’d be able to figure out the logistics during a Pandemic. So one day, he said we’d take the boat out to a nice restaurant on the water so he told me to dress up nice. Me being super excited to even put on a real dress after 4 months of PJs and being able to eat out, I obviously (and thankfully) put on a nice outfit. The boat ride was beautiful and he got pretty sentimental – which in the moment, I chalked off to him having a few beers. Little did I know, we got to the boating dock and his 4 nieces were holding up a “Will you Marry Me?” sign. I don’t think my heart has ever beaten that fast. I looked at him and he went down on one knee. I swear to God I have absolutely no memory of what he said (and made him repeat later – lol) but all I remember is crying. He was down there for about 5 mins and had to repeat “I guess that’s a yes…?”. Of course, I said the loudest YES (with more tears). We celebrated with his family and got back on the boat for the most stunning sunset I have ever seen in my life – with a view of the Canadian mountains. Of course, finding him and saying yes to marrying him was an absolute dream come true but to top it off, I found out later that he had FaceTimed my uncle in India, who’s always been a father to me, but especially so after my dad passed away 8 years ago, and asked him for his blessings. He also imported an ethically-sourced diamond ring from South Africa, which happens to be my favorite country in the whole world. These gestures are two amongst a million reasons I love him more every day.

(Isn’t he the sweetest guy in the whole world?) Few months into dating I knew he was the one in my heart. But for me, it wasn’t just that simple. Once things got serious, fear took over – “will he ever accept my culture?”, “what will my parents say?”, “will he like my big loud Punjabi family?”, “will he ever understand the Bollywood songs I grew up listening to?”. Questions and more questions piled up in my head as my heart and brain played tug of war. Although I’ve been in the US for the last 8 years, this idea engraved in my head that we’re “supposed to” marry within our religion, our caste, our culture was hard to shake off. It got to the point where I almost thought about giving up and calling it quits – my brain had me convinced that it would be too hard. I expressed this to him one day and he said “you and our family will always be first, nothing else matters”. With a conflicted heart, I had a typical late-night FaceTime venting session with my best friend and I remember her saying “sometimes in life, you just gotta jump and take a leap of faith. Let life figure out the rest”. So that’s what I did.

During my next visit to India I told my family about him and as any Indian parents, they had their apprehensions. I’m fortunate to have parents who ultimately believe in love and have given me immense freedom to make choices for myself and follow my dreams in a new country but even then, the stereotypes of the “American individualistic culture” are so etched in our society, that they couldn’t help but wonder if this will be right for their little girl. Yes, it’s unfortunate that instead of looking at an individual’s true qualities for your child’s life partner, our parents are sometimes crippled by societal constructs of who we’re “supposed to” marry. But I knew no matter what I said, it wouldn’t truly change anything unless they met him and see what I had – that stereotypes are gross-generalizations and oversimplified ideas of something that’s simply unfamiliar, and none of it matters as long as there’s true love, respect and happiness.

So, after days of convincing, my family finally decided to take a trip to Iceland where he would join from the US for a weekend. The very first day he met my mom, he immediately touched her feet; a moment I’ll never forget and nor would my parents. By the end of the trip, I asked my uncle (who’s always been a father to me, but especially so after my dad passed away 8 years ago) to step aside for a chat. I asked him what he thought of Dan. I remember being so nervous because his acceptance of who I am has always meant everything to me. He took a long pause while he took a sip of his beer, then said, “I would be so happy if this is the guy you marry, and I think so would your dad”. He’s a man of few words so that one sentence meant the absolute world to me.

From that trip on, everything I saw was so far beyond I could’ve ever expected – from learning the family tree (massi’s, mamu’s, chachu’s & a million other extended relationships), to indulging in Punjabi food to binging Bollywood classics, to learning how to cook channa-bhatura with my mom – he not only accepted my culture but embraced it, all of it, with the purest love, utmost curiosity and a willingness to learn.

As time went on, my parents, especially my mom, started loving him probably more than they love me and I realized, we’re human before we’re anything else. If you told me 3 years ago that I would meet someone who quite literally grew up on the opposite side of the world, and yet their values, principles, goals, and habits would align so uncannily with mine, I would tell you that you were crazy. As we now prepare for our *hopefully soon* Hindu/Catholic wedding, I can’t help but think back to those words – “sometimes in life, you just gotta jump and take a leap of faith. Let life figure out the rest”.

We’d love to hear your reaction to this sweet story? Comment down below! 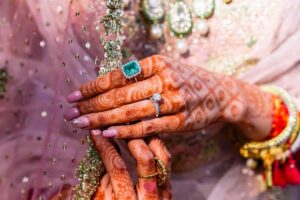 When Should You Take Off Your Engagement Ring? 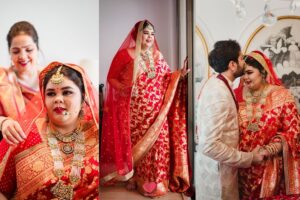 A Plus-Size Sabyasachi Bride Shares Her Story On Body Positivity 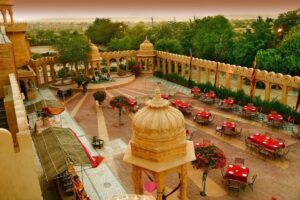 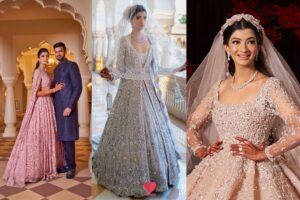