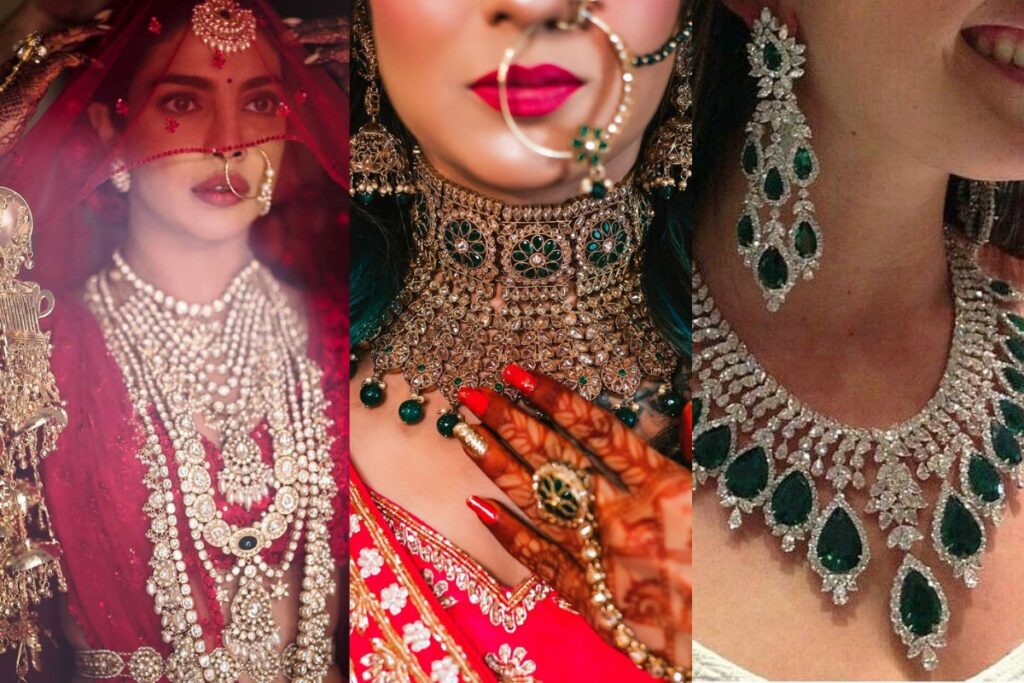 Difference between kundan, polki and jadau:

Kundan is a form of jewellery made from the purest form of gold. The setting which encases the stones is called Kundan. Polki is uncut, unfinished diamonds. When the polki stones are set in the encasement, it’s called Kundan-Polki jewellery and the art of making kundan and polki is Jadau!

Let us explain it through the following images: Check Out: All The Pictures + Videos From Priyanka Chopra & Nick Jonas’ Wedding

So, in Priyanka Chopra’s wedding jewellery, the stones you see are unfinished, uncut diamonds – POLKI! Polki diamonds are cheaper than the finished diamonds, used in pure diamond jewellery. Like this one: The setting in which polki diamonds are placed is called Kundan. So, it was a pure kundan-polki set. And the process of making kundan polki jewellery with pure gold is called jadau.

Apart from kundan polki jewellery, you might have also heard about kundan meena jewellery. Meena is basically short for meenakari, an art of coloring the surface of any metal with aesthetic colors (discussed more later in the blog!). The green hue that you see around some polki stone in the jewellery set below is meenakari. And that my girls is what we call kundan meena jewellery. There’s no polki jewellery without kundan. But there is Kundan without Polki.

Kundan has become quite commercialised now and has been used to set different kinds of stones, and not just precious ones, without using gold. Like this necklace here. All these jewellery names earlier used to pertain to only royal families. Kundan, specifically, has lost its value due to extensive commercialisation. Polki and jadau names do retain their trust and value though.

The next part of the blog just details on all 3 types of jewellery – process, importance etc. If your job is done, head over to our next blog. Here are some that may interest you:

What is Kundan jewellery?

Kundan is just the setting or the encasement where stones are set. The word ‘Kundan’ means pure, highly refined 24k gold. The gold is beaten and built into the desired shape for stone setting. The strips are very thin and so the amount of gold in a jewellery set is minimal. Trust only reputable jewellers in your city to use pure gold for their kundan pieces, and ask them for certifications as well. Not the whole setting can be made with 24k gold since it’s quite soft, so only jadayi part is done with pure gold.

How is Kundan Jewellery made?

Kundan art is one of the oldest forms of jewellery in India. It was brought to the country by Persians and Mughals, and the art gained its prestige as the Mughals flourished. Royal families then adopted the same and it trickled down to further sections of the society in the past few decades.

All pieces of kundan are extremely intricate and hand-made. A small piece can take around 2-4 months to finish and only a few artisans in India can create the jewellery with extreme precision. Polkis are untouched, unfinished diamonds in their raw, natural form. It’s the oldest form of diamond in India and the rest of the world. The only polishing that polki diamonds are subjected to is along their surface, so no two diamonds are ever of the same structure. Because of their purity, polkis jewellery is quite expensive. Although not pricier than diamond jewellery that undergoes extra effort of cutting and polishing.

Again, due to intricacy of the making, polki jewellery can take anywhere around 2-3 months to complete. Polki has a timeless feel to it and is purchased so as to pass on to the future generations. If you’re planning to buy polki jewellery, we advise to invest in a fine piece by a reputable jeweller only. Someone who has been in the business for a long time, so they have artists that can add the finesse polki jewellery requires.

Sonam Kapoor in polki jewellery for her reception: Here’s another bride in kundan-polki set. The art of jadau jewellery making came to India along with Mughals and was perfected seamlessly by craftsmen in Rajasthan, where it is still preserved in the most original form. The state is still the mecca for it, and this is where you need to visit for your jadau jewellery set.

Jadau is a method where precious stones like diamonds, emerald, sapphires are engraved into a gold setting. The design is finished by a group of artisans known as Chiterias and making is all done by Ghaarias. All jadau jewellery is decorated by meenakari work at the back. The complete jewellery set can take around 2 to 3 months to complete.

Jadau jewellery is ONLY done in pure gold form, 22k or 24k, not less than that. And this also makes it quite an expensive form of jewellery. What is Meenakari jewellery?

While we’re at it, we thought we’d also sum up a little about what meenakari jewellery is. Meenakari is simply an art of fusing colors into metal. It was also brought to India during the Mughal era. So, any green or blue or pastel colors done on the set makes them meenakari jewellery. Since gold holds the enamel better than any other metal, it’s often done on kundan, polki and jadau sets.

Here are some examples of meenakari jewellery: We hope you’re leaving this blog with a lot of clarity. Let us know if you’ve any more questions by commenting down below! 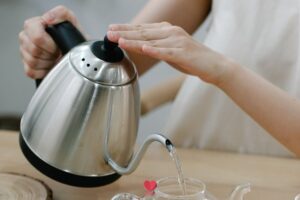 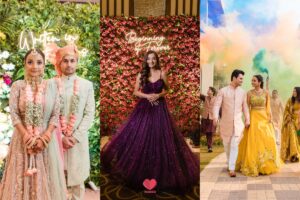 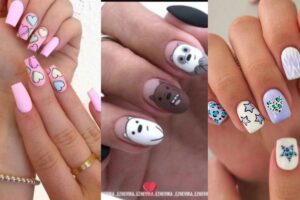 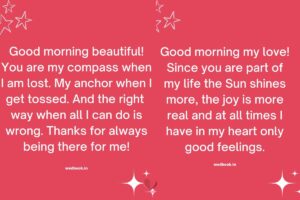 151 Good Morning Paragraphs For Her